Built in circa 1610 and known locally as the Great House, the Fleece Inn has a distinguished 400 year history of murder, paranormal activity and much more.

As with any inn of this age it has many tales and ghost stories. 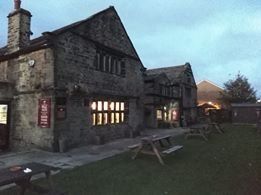 A story had been told that a man went to Elland market and there he defrauded a local man, who chased him up Westgate to the Fleece Inn, where a fight ensued. One of the men was killed and bloodstains were found on the wooden staircase. They carried him from the room, through the bedroom and down the staircase, leaving splashes of blood all the way down the stairs. There is also a bloodied hand print. The bloodstains remain as a permanent reminder of the murder and no amount of scrubbing would obliterate them. Many have tried but they always re-appear when the woodwork dried.

A male spirit seen one Christmas morning in the bar area, he seemed to take a dislike to the large TV on the wall, it was then thrown across the room, smashing onto the stone floor. Strange large shadows noted in the bar area, quickly followed by a large industrial drier being moved to block a door behind the bar.